Jesus Christ is unlike any other person in the ancient world, real or fictional. Jesus lived in an obscure part of the world, was brought up in a the family of a tradesman, and never took political or personal power. Ultimately he was crucified and then rose bodily from the grave. These were all ideas that were unlikely to be believed in the ancient world unless there was truth behind them.

For Jews demand signs and Greeks seek wisdom, but we preach Christ crucified, a stumbling block to Jews and folly to Gentiles (1 Corinthians 1:22,23)

The Jews imagined that their Messiah would immediately bring about the Kingdom of God by defeating the Romans and setting off on a string of great military conquests. The Greeks imagined a hero who would suffer hardship without complaint, would move in the highest levels of society and would finally overcome his enemies. Neither Jews nor Greeks were expecting a cruxifixion; they certainly weren’t expecting a bodily resurrection and indeed they believed that such things were beneath the consideration of any educated person.

The same picture continues into the second century AD. The writings of Celsus (especially his book “The True Word” c178AD) show elements of the life of Jesus that a pagan would never imagine to be part of the experience of a person sent from Heaven:-

The important point is that if the Gospel writers had invented the person of Jesus then they would have included none of these points within their accounts. Instead a Gentile would have made Jesus a demigod like Hercules or Perseus while a Jew would have attached Messiahship to a successful general or revolutionary who fought the Romans.

The thought in the Gospels is unlike the thought in any other source of the time. This means that the Gospels would not have been invented by any people in the ancient world, which is a good indication that they are the record of a real person with a unique message.

for a PDF document. 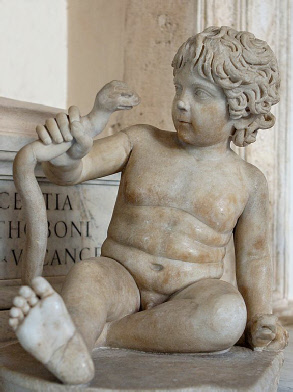 Hercules was the archetypical Greek hero, son of the God Zeus and a human woman (Alcmene). As a result Hercules was effectively superhuman from the time of his birth. This picture shows the infant Hercules in the process of killing a large snake that has been sent to destroy him. Other demigods appear in Greek mythology who show similar heroic stature.

A Greek from the period following the time of Jesus would have expected the Son of God to have been like Hercules or Perseus. Instead Jesus lived a much more quiet life where he reveals the word of God rather than taking part in heroic activities, raising armies and overcoming enemies.

The comparison of Jesus with mythological figures forms a significant element of  contemporary criticism of the Jesus of the Gospels.

Why Believe the Gospels?

The Gospels are our primary evidence for the person of Jesus Christ, who he was, what he taught and what he did. Click here for evidence that shows how reliable the Gospels really are.

Jesus claimed to be the Son of God. This is an important claim and needs investigating. Click here to see the evidence.

Click here to link to the main page which begins the presentation of the evidence for the Jesus of history and of the Gospels.

Jesus lived in the real world and while he was not a figure who would be expected to attract attention in the Roman world he still appears in documents outside the Bible. Click here for a summary of this evidence.