The Gospels have many narratives which describe places, people or customs from the time of Jesus. Some of these have been excavated by archaeologists and the correspondence between them and evidence in the Gospels is outstandingly good. The evidence can be divided into categories and is summarised below.

The evidence of archaeology is especially useful for the Gospels because in 66AD, about 40 years after the start of Jesus’ ministry, a war began between the Romans and Jewish rebels. This resulted in the destruction of the culture and society of the area and in 70AD Jerusalem was rased to the ground; Josephus claims that no-one who looked at its site would have supposed that a city had ever been built there. As a consequence the detail of the area and life within it was, to a great degree, forgotten. If the Gospels had been invented later on they would not have contained correct and accurate detail.

Evidence of Customs and Lifestyle

The gospels contain various references to customs which were carried out at the time of Jesus, but were discontinued later on. These customs are found in the Gospels, usually referred to as an aside.

The Gospels mention many places, some of them in considerable detail. Again, comparison with archaeology shows that the places generally exist as described.

People in the Gospels

Some of the people mentioned in the Gospels who had a high social standing have left evidence of their existence. These include Herod the Great and his successors, Pontius Pilate and Caiaphas the high priest.

The city of Jerusalem is the site of a large number of incidents in the Gospels, especially in John. The places identified include the pools of Siloam and Bethesda, various details of the Temple, the Governor’s residence, the house of the high priest and the route from Bethany to Jerusalem. Jerusalem has been heavily excavated since the six day war in 1967 and a detailed correspondence has been found between the buildings and layout of Jerusalem and the descriptions in the Gospels.

The detail in the Gospels shows much more than merely a general knowledge of Judea and Galilee in the time of Jesus. It shows a detailed knowledge of the period and this detail is embedded in the narrative. Often the detail is obscure and insignificant, which means that it was unlikely  to have been placed there deliberately by the writer. This is direct evidence that the narratives of the Gospels were not invented in the late first or early second century, but represent detailed and accurated accounts of actual events in Judea and Galilee as Jesus taught and worked.

Click here for a single page summary of the archaeology of the Gospels in pdf format.

Click here for a 12 page article which summarises the archaeology of the Gospels and shows how this bears on the question of the reliability of the Gospel accounts.

Watch this space for a longer article which contains a detailed picture of the archaeology of the Gospels.

Click here to link to a page on the archaeology of the New Testament after the Gospels.

Click here for the main page for evidence on the Gospels. 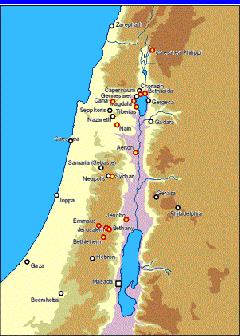 The Gospels contain descriptions of a wide range of towns in Judea and Galilee where Jesus worked and taught. Many of these have been excavated by archaeologists.