The Bible is regularly attacked as inaccurate or even fictitious. The evidence, however, is that it contains an accurate record of the events it describes. There are several different areas of evidence and these have different weights for different parts of the Bible. Each of them is considered on a separate page in this website, and there is a separate page for each area of the Bible. Various longer articles can be viewed online or downloaded as pdf files from these pages.

The Bible contains descriptions of places, people, customs and events which have left traces in the archaeological record. While there are still some puzzles, the overwhelming correspondence of archaeology with the Bible accounts is a startling testimony to their accuracy. Given that the parts of the narrative that can be checked are accurate, often to tiny details, is good evidence that the rest of the narrative is also accurate. This is particularly so as the original writers of the Bible could not have been expected to know what elements of the accounts would be excavated by archaeologists centuries later.

An undesigned coincidence can be said to have occurred where two or more independent accounts of some event contain insignificant details which have no effect on the main narrative but fit together to provide a consistent underlying picture. The underlying picture is often insignificant in itself and often unconnected to the main narrative. It would be very difficult for the writer of a fictional account to produce any detail like this; it would be impossible for two independent writers to make up accounts which contained undesigned coincidences. The existence of very many undesigned coincidences within the Bible narratives shows that the accounts containing these coincidences are accurate down to even tiny details.

The original manuscripts of the Bible are lost. What we have are copies of manuscripts going back over a long period of time. However, in the case of the Old Testament there is remarkably little difference between the many manuscripts available and there is independent evidence that the text of the Old Testament remains effectively unchanged since the time of Jesus and before. In the case of the New Testament there is more variation but the large number of manuscripts available ensures that the real text can be reconstructed with a high degree of confidence.

The origins of a document can often be seen in the language used in it. The existence of Hebrew and Aramaic fragments in the Gospels, for instance, shows that events described happened in an area where these were the normal languages. This culture was destroyed in the war between Romans and Jews in 66-70AD. The church which followed spoke Greek. The existence of Semitic fragments within the New Testament shows an early date and a preserved text.

There is a general assumption that the Bible was written long after the events it described had happened. The evidence indicates that this is not the case, and that the books of the Bible were written down well within the lifetime of many eyewitnesses. As this is the case it would be difficult for fictional events to be inserted into the accounts; any inventions within the narrative would be challenged. The fact that they were not shows that the accounts are accurate.

Click here to link to the main page for undesigned coincidences.

Click here to link to the main page on textual reliability for the Bible.

There is more to the Bible than accurate history and clear descriptions. The Bible has an authoritative message. Click here to link to the main page providing evidence that the Bible is a message from God.

Click here to link to the main page on Linguistic Fossils.

Click here to link to the main page about the date at which the various parts of the Bible were written. 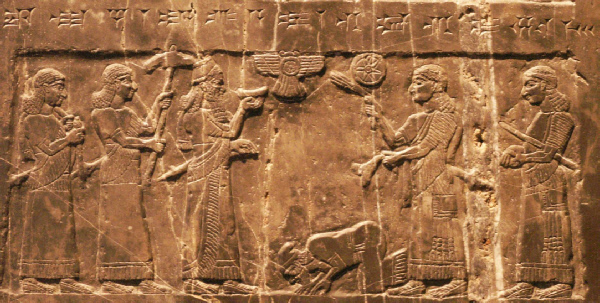 Assyrian relief of Jehu, king of  Israel, who is the figure bowing down before the Assyrian King.