An undesigned coincidence occurs where there are tiny details in an account. These details are irrelevant to the main story, but they match other insignificant details elsewhere to provide a picture which is unconnected to the main account or accounts in which the details are found. Because the details are insignificant they are usually not even noticed, and it would be extremely difficult for corresponding details to be produced in a fictional account, or even an inaccurate one. This method of testing the accuracy and reliability of accounts has been used in courts of law; the name was invented by J. J. Blunt in the 19th century; Blunt’s “Undesigned Scriptural Coincidences” is a classic book on the matter.

The requirements for an undesigned coincidence are:-

It would be extremely difficult for a single writer to insert an undesigned coincidence into a narrative which was either fictional or contained a significant amount of fictional matter.As such a coincidence is unlikely ever to be discovered it would not be worthwhile for the writer to put in the large amount of effort that would be necessary. It would be even more difficult for several separate writers to invent an undesigned coincidence between them, especially if they were separated by distance or time. If the accounts are independent of one another it would be completely impossible.

This, and other coincidences found since the time of Blunt and Paley are excellent evidence that the Bible is a reliable account of the events it describes.

In 1 Corinthians 15 the Apostle Paul gives a list of witnesses who saw Jesus alive after his resurrection. His list contains a reference to a group of more than five hundred people:-

Then he appeared to more than five hundred brothers at one time, most of whom are still alive, though some have fallen asleep. (1 Corinthians 15:6)

The only reason that Paul could have for telling his readers in Corinth that the majority of these witnesses were still alive is that the Corinthians could ask questions of them, which in turn means that some of them might reach Corinth. This number of witnesses must correspond to the witnesses on the hill in Galilee of Matthew 28:-

And Jesus came and spake unto them, saying, All power is given unto me in heaven and in earth. Go ye therefore, and teach all nations, baptizing them in the name of the Father, and of the Son, and of the Holy Ghost:   (Matthew 28:18,19)

This pair of  references is a witness to a group of people who are hardly mentioned in the New Testament or in the later Apostolic Fathers. They may correspond to the Evangelists or Prophets described in 1 Corinthians 12:28 and Ephesians 4:11. However they are sufficiently rarely described to be an insignificant detail in the text and in any case neither of the passages is about the people who travelled to proclaim the Gospel. The accounts are clearly independent of one another and there is a clear correspondence. This is a valid undesigned coincidence, although it appears in neither Blunt nor Paley.

When a single undesigned coincidence is seen for the first time it often produces a feeling of anticlimax. This is because the details are always insignificant and the matter of the coincidence is often minor. However, the evidence of large numbers of these coincidences is a powerful witness to the reliability of the Bible. 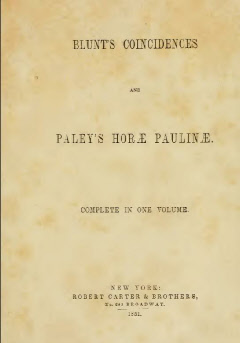 Click here to download a 14 page pdf which gives an introduction to Undesigned Coincidences as a witness to the reliability of the Bible.

Link to the main page on evidence for the reliability of the Bible.

Coincidences in the Gospels

Click here to link to a page on Undesigned Coincidences as evidence of reliability in the Acts of the Apostles and the Letters of Apostles.

Link to a page which shows how undesigned coincidences give a witness to the reliability of the Old Testament.

The text of the Bible that we have today can be shown to be virtually identical to the text in the first century AD. Click here to link to a page which discusses the evidence for the Bible’s text.