Undesigned Coincidences in the Old Testament

One of the larger detailed correspondences between the two main historical narratives (Kings and Chronicles) is the way that the dating information within them can be fitted together to produce a consistent chronology. This is done by fitting together large numbers of minor coincidences between accounts. More conventional undesigned coincidences are also common in the Old Testament. Blunt lists 65 different ones. Here are examples of just two.

The Children of Israel left Egypt and crossed the Sinai Desert to arrive on the east bank of the River Jordan a generation later. From here they crossed into Canaan. The first town that they took was Jericho. The crossing of the River Jordan took place in the spring. The date is given in Joshua 4:18 as the tenth day of the first month. This is four days before Passover, and the Passover was celebrated soon afterwards (Joshua 5:10).

Before the Israelites crossed the River Jordan two spies were sent out to Jericho. Here they were seen and soldiers were sent to look for them. They were hidden by a woman called Rahab on the roof of her house. The detail that is important is that the men were hidden under piles of flax:-

But she had brought them up to the roof and hid them with the stalks of flax that she had laid in order on the roof. (Joshua 2:6)

In the land of Canaan the barley harvest began just before Passover. It was preceded by the flax harvest which ended as the barley harvest began. This can be demonstrated by consideration of various passages in the Old Testament, but it would be known to anyone who lived in Canaan as part of their lives tending crops. It was because of the time of year that there was flax drying on the roof of Rahab’s house.

The coincidence lies in the time of the crossing of the Jordan - just before Passover - and the detail that there was flax airing on the roof of Rahab’s house, something that might be expected at this time of year. The details are insignificant and not a major part of the story and one has to look hard to find them. They are certainly consistent. It is unlikely that they were invented by the writer, which suggests that they are part of an accurate historical record.

The Occupation of Gibbethon

When the Israelites entered the land of Canaan and settled there, Gibbethon was assigned to the Levites. However, in 1 Kings 15:27, in the reign of Baasha (early on in the divided monarchy - c900BC) Gibbethon was occupied by the Philistines and the army of the northern kingdom of Israel was besieging it. This shows a change in occupancy in the preceding five centuries.

The change in ownership is not described in the Bible, but the reason for its happening is given in 2 Chronicles. This is in the account of the reign of Rehoboam, king of the southern kingdom of Judah a little earlier than the time of Baasha (930-913 BC). The passage which explains why the Philistines could easily occupy the city is:-

Rehoboam lived in Jerusalem, and he built cities for defense in Judah...

And the priests and the Levites who were in all Israel presented themselves to him from all places where they lived. For the Levites left their common lands and their holdings and came to Judah and Jerusalem, because Jeroboam and his sons cast them out from serving as priests of the LORD,  (2 Chronicles 11:5,13-14)

The city had been abandoned by the Levites because of the religious policy of Jeroboam I, the king of Israel shortly before Baasha (who seized the throne from Jeroboam’s son). As a consequence the Philistines were able to take Gibbethon in an era when city walls were proof against most armies.

The detail is minor and three different books of the Bible are required to explain events.

Click here to link to the page for undesigned coincidences in Acts and the Letters of Paul.

Linguistic Fossils are an alternative form of evidence that words of people recorded in the Gospels are from Judea and Galilee at the time of Jesus. Click here to link to the page for this subject.

Click here to link to the main page on evidence which shows how reliable the Bible is as a record of real events.

Click here to link to the main page on the reliability of Acts & the Epistles.

Click here to link to the main page for undesigned coincidences.

Click here to link to the page for undesigned coincidences in Acts and the Letters of Paul. 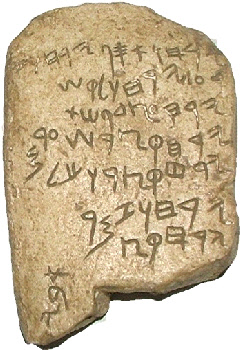 The Gezer calender, a text which records the activities of the agricultuarl year in Old Testament times.

Watch this space for a pdf document giving details of undesigned coincidences in the Old Testmament.

Undesigned Coincidences in the Old Testament