Evidence for Acts and the Epistles

Evidence for Acts and the Epistles

After the Resurrection of  Jesus the message of the Gospel was proclaimed by the followers of Jesus. Their witness began in Jerusalem and spread from there, first to Samaria, then throughout the Eastern Roman Empire. The Acts of the Apostles describes the activities of the Apostles as they spread the Gospel from Jerusalem in about 30AD to Rome in 62AD.

The accounts of events in acts covers the provinces of Judea, Syria and Cilicia, Galatia, Asia, Macedonia, Achaia and Italy. The Apostles visit scores of cities, from Antioch to Rome and from Jerusalem to Athens. Everywhere, the details of the area correspond to what is known of the customs and geography of the period. The correspondence between Acts and the Letters written by the various Apostles is subtle but nevertheless clear if one looks for it.

Evidence to support the reliability of the New Testament as it covers this period includes the following:-

Archaeology:  Descriptions of places, people and events in Acts or the Epistles match what is seen from archaeology. Acts was not made up, but written by someone from the time and place of the first Apostles.

Undesigned Coincidences:  The narrative of Acts is meshed with the letters and the letters with one another in a way that could not have been made up.

Evidence of Dating:   The letters can often be dated to within a few months. As this is done by comparison with Acts, Acts must also be an accurate record of the period.

Manuscript Evidence:  Thousands of New Testament manuscripts guarantee the textual integrity of Acts and the Epistles.

The correspondences between Acts and the letters of Paul are so good that it is possible to determine where Paul spent every winter of his life after his conversion and the date of all of his letters. Click here for more information on the dating of the period of the Apostles. 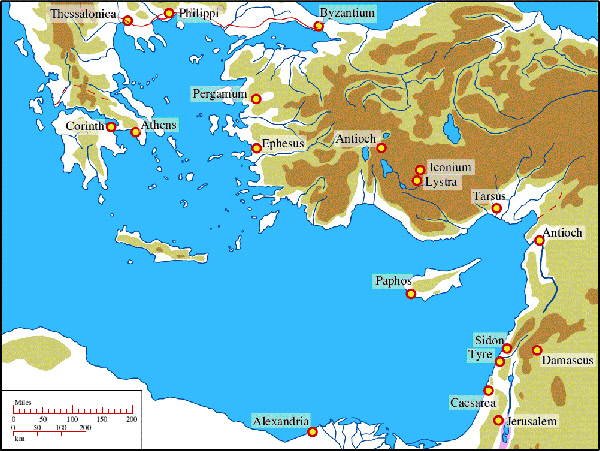 There are nearly 6,000 Greek manuscripts of the New Testament and many more in other ancient languages. These show that the text of Acts and the Epistles, like the rest of the New Testament, is essentially unchanged since they were written. Click here to find more details.

The Epistles, and especially the book of the Acts of the Apostles contain information about a multitude of cities and provinces of the early Roman Empire. Some of these have been excavated by archaeologists; the correspondences are very convincing. Click here for more.

Paul - Witness to the Gospel

Many people don’t like the message that they think Paul brought. This page examines his claim to be an Apostle and to carry a message from God.