After the resurrection of Jesus his disciples began to proclaim his message, initially in Jerusalem but then spreading throughout the ancient world. By 60AD the Gospel had been proclaimed in Syria, Turkey, Greece, Macedonia, North Africa and even in Rome. The main New Testament document that describes the progress of the Apostles in proclaiming the Gospel of Jesus is the book of the Acts of the Apostles. This refers to a range of people, places, events and customs in the Eastern Roman empire; many of these have been excavated by archaeologists or are mentioned by some of the secular writers of the period. The letters of the Apostles which accompany Acts also provide witnesses to the period.

Some of the major sites that have been thoroughly excavated include Rome, Corinth, Ephesus and Philippi. Other cities, such as Antioch, Paphos, Berea and Thessalonika have had small amounts of excavation, but this also supports the narrative of Acts.

As an example, the narrative describes the end of Paul’s stay in Ephesus in Acts 19. Here the preaching of Paul has caused opposition among the silversmiths who made statues of Artemis/Diana of the Ephesians. The riot begins in the silversmith’s area and moves rapidly into the town theatre. A look at the site shows that the theatre is very close to the commercial agora where the silversmiths would work.The titles of various authorities who are affected by the riots are included in the narrative; these people are given their correct designations. 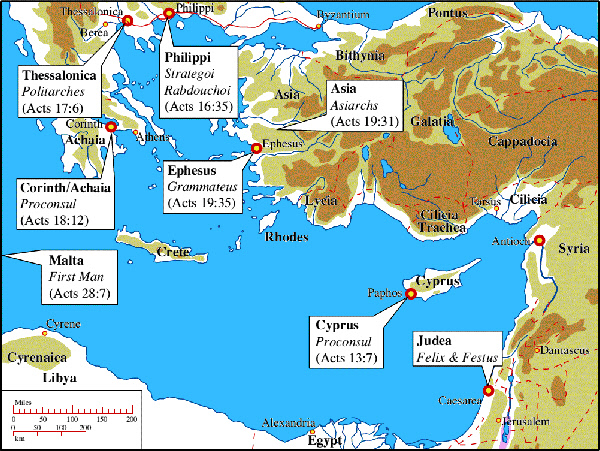 One of the most notable features of the whole of Acts is the way that it refers to the governors of the various cities and provinces visited. The Roman empire did not have a unified system of government throughout, but tended to use variants of earlier systems of government. This means that the titles and responsibilities of the leaders in the various cities varied tremendously from city to city and from province to province. There was no central record of the titles in the Roman bureaucracy; only an eyewitness with a very good memory would be able to produce a suitable list. Luke manages to do exactly this. The map above shows some of the titles used along with the references of the place where these appear in Acts. It is noticeable that these titles are never a major part of the narrative. The titles are always minor details, which means that it is unlikely that they were introduced to the narrative directly, something that would have been very difficult for an ancient author to have done.

In general archaeological discoveries and the witness of ancient authors give extremely good support to the statement that the Acts of the Apostles is a very accurate description of the events in it.

The date of writing of Acts and the letters is important evidence in understanding the accuracy of the narrative. The correspondence between the various documents is so good that it is often possible to date a letter to a period of a few months; this alone is good evidence for the reliability of the texts of both.

for a 10 page article in pdf form which discusses the archaeology of the early church and its witness to the accuracy of Acts and the Letters.

The Old Testament covers the history of Israel from the Exodus in about 1450BC to the middle of the Persian period in about 400BC. Large numbers of discoveries by archaeologists confirm the Bible accounts.

Click here to link to the main page which presents evidence connected with the Apostles after the resurrection of Jesus and their writings.