The oldest parts of the Old Testament go back to the time of Moses and the newest parts were written in about 400BC. The original copies (autographs) were preserved in the Temple in Jerusalem; copies were made from these and these primary copies were used as exemplars for the production of other scrolls. The Temple was destroyed in about 600BC when the Babylonians conquered Judah, However, when the Jews returned from exile the text of the books already written was restored by the comparison of primary copies and further books were added. The restored manuscripts were placed in the new Temple and copies produced from Temple exemplars. This continued until after the time of Jesus, when the Temple was again destroyed, this time by the Romans. However, some of the manuscripts in the Temple had been hidden before the destruction and a further reconstruction produced a Hebrew Text which has been copied continuously to the present day. This is called the “Masoretic Text”.

The Masoretes (who copied the Masoretic Text) took tremendous care with their copying. Stringent rules for copying were laid out and observed and the text was thoroughly checked afterwards. Everything that could be counted or measured was and errors were detected by this measurement. The result is that modern Masoretic manuscripts do not differ at all in their text. The only differences are in marginal comments.

The accuracy of the Masoretic Text can be assessed and confirmed by comparison with a number of important sources. These include:-

These witnesses confirm an important point, that the modern text of the Old Testament is the same as it was when Jesus endorsed it as the Word of God.

A single sheet pdf file which summarises the evidence for the reliability of both the Old and New Testaments.

A 10 page pdf file which discusses the reliability of the Old Testament documents. Watch this space.

Click here for a page on the textual reliability of the New Testament.

This is a translation of the Hebrew Scriptures into Greek made in early third century BC in Alexandria. According to legend the translation was made by seventy translators. By the time of Jesus the whole of the Old Testament had been translated and many fragments have been found in the Dead Sea Scrolls. The LXX was copied by Christian scribes and so is independent of the Hebrew Text

These were free translations into Aramaic with explanatory notes and additional stories. The official Targums were made soon after the time of Jesus.

These were discovered in 1947 in the desert on the shores of the Dead Sea. About 200 manuscripts of the Old Testament are among them, dating from before 200BC to the early part of the first century AD. They were buried in 68AD and prove an independent witness to the text of the Old Testament.

Click here for a link to a page which introduces the Dead Sea Scrolls. These provide a strong witness to the text of the Old Testament and throw some light on the writing of the New Testament.

Evidence for the reliability of the Old Testament and the inspiration of its message. Click here.

Psalms scroll from Cave 11 of the Dead Sea Scrolls.

This page is is the main page for the Textual Reliability of the Bible. 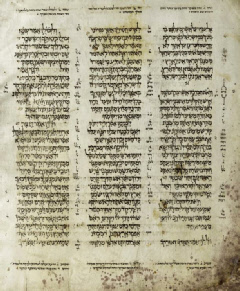 The Aleppo Codex, oldest example of a Masoretic Manuscript