Evidence for The Old Testament

Evidence for the Old Testament

The Old Testament is formed of the first 39 books of the Bible. They were mainly written in Hebrew although there are elements of Aramaic, and they are rooted in the history of Israel from before its establishment in the land of Canaan in about 2,000 BC to its status as a province of the Persian Empire in about 400BC.

As with the New Testament there is a considerable amount of evidence to show that the Old Testament is a reliable record of the history of Israel and of the events it describes. This evidence includes the following:-

This evidence is good enough on its own to show that the modern text of the Old Testament gives an accurate account of the actions of men and the words of the prophets in its accounts.

Archaeology and the Old Testament

The Old Testament is an account of national behaviour. This means that many traces were left in the ground, and while older remains have sometimes been overlaid by newer, there is much which supports the account of the Old Testament.

In addition to the evidence that shows that the Old Testament has a reliable account of the words and actions of the prophets and of the history of Israel there is evidence that the Old Testament contains words and ideas that could not have originated with ordinary human beings. These are the words of God, written by men inspired by God to write them. The evidence to support this includes:

The evidence for inspiration is strong. It is worth looking at. Click on the links to the right of this page to look at specific kinds of evidence.

The detailed comparisons in the Old Testament are a tremendous witness to the accuracy of detail in the modern text. This shows that the accounts were not invented and that the text has been transmitted accurately to the modern day.

The text of the Old Testament has been preserved better than that any other document from before the time of printing. Read the evidence of this. 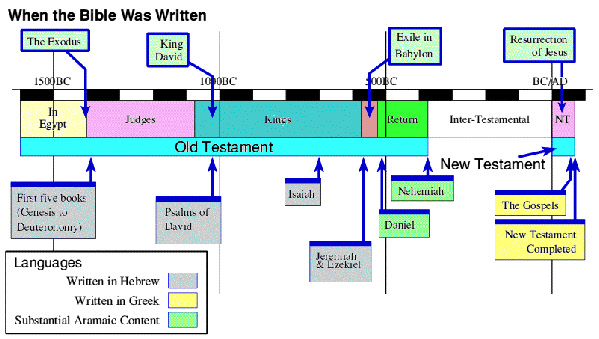 The Old Testament contains many predictions of things that were in the future when the prophecy was written. Many of these were about situations which have occurred since, and these predictions have been fulfilled in great detail. Ordinary humans would not have been able to write such accurate predictions.

The Bible was written by over 30 different people from peasant to king and tax collector to scholar. Its writing took 1400 years and three different languages were employed. In spite of this it has a single unified message. No human being could produce such a project.

The earliest parts of the Bible were written in the Middle Bronze Age and the latest in the early Roman Empire. Its facts could be understood by these people but are scientifically accurate. How did the Bible writers know what bits of science would change?

Jesus is an authoritative person, guaranteed by the resurrection. He states that the Old Testament was inspired by God.