The Archaeology of the Old Testament

The Archaeology of the Old Testament

The Old Testament has a different feel from the New Testament in that much of it deals with national history. The protagonists are often kings and the actions include matters that can leave evidence in the ground. The history of Israel in the Old Testament is established over and over again from the time of Solomon onwards.

Some of the evidence from this period comes in the form of the cities and villages which are left behind in the ground. Other evidence comes from the tombs of those who died, or from inscriptions left to commemorate events. For example, by looking at the different walls of Jerusalem one can see an early settlement which becomes progressively larger and better fortified until the destruction in about 590BC. About 540BC the city was again inhabited but the wall that was built was built in haste to a low standard. This is consistent with the history of Jerusalem in the Bible.

However, before the time of King David (who reigned in the 11th century BC) Israel was a nomadic people. This means that they left little trace of their doings that can be discovered by archaeologists. Archaeology is thus of much less help in looking at the Bible before about 1000BC. 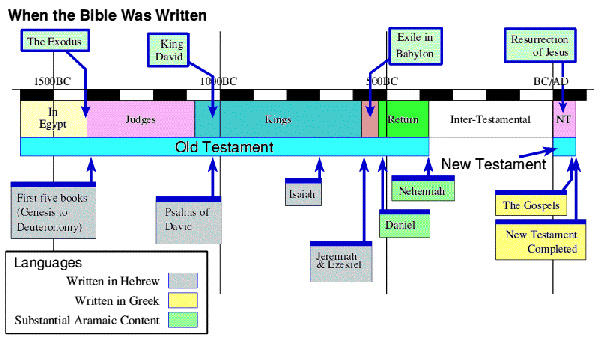 This chart shows the chronology of the whole Bible. Most of this is taken up with the Old Testament. The history from the end of the reign of King David onwards is thoroughly supported by archaeological finds. Before this time Israel was generally nomadic and evidence is much harder to obtain.

Hezekiah was king of Judah at the time of the Assyrian invasion of the area. Early on in his reign the northern kingdom of Israel was finally taken captive and later on Judah was also invaded. The Assyrian invasion left a legacy of siege-works and destruction layers which allow this time to be identified with confidence. The reign of Hezekiah is described in 2 Kings 18-20, 2 Chronicles 29-32 and in some of the books of the prophets such as Isaiah and Micah.

Early on in the reign of Hezekiah he ordered the removal of the high places - these were religious sanctuaries outside Jerusalem. The period is marked by signs of the destruction and removal of stone altars. The period also shows an increase in the fortification of Jerusalem to resist the invading Assyrians, a process described in the Bible. Sennacherib, the Assyrian king, besieged the fortress-city of Lachish and captured; he left a set of reliefs on the walls of his palace which depict the storming of the city. His campaign Judah is referred to in a set of cuneiform inscriptions on clay prisms; two of these are in the British Museum. These record the conquest of most of the region by the Assyrians but tellingly indicate that while Hezekiah was “shut up” in Jerusalem it was not captured, exactly what the Bible tells us. The Assyrians retreated from Judah because of a sudden plague which killed large numbers of their troops. This is confirmed by the existence of mass graves of Assyrian soldiers which have been discovered near Lachish where the main Assyrian camp was sited.

This and many other examples show that the Old Testament has a remarkably accurate description of the events that appear in its accounts.

Evidence and the Old Testament

Click here to go to the main page for evidence on the reliability of the Old Testament. 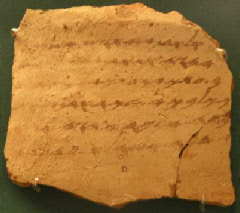 for a pdf file which gives a summary of the Archaeology of the Old Testament.

One of the Lachish Letters, in which a contemporary witness records some of the events that accompany the invasion of Judah by the Babylonians.. This campaign was a disaster for ancient Judah, and is described in numerous places in the Old Testament.

Click here to link to a page on the archaeology of the New Testament after the Gospels.

A review of the evidence for the reliability of the text we now have for the Old Testament.